It's Been a While

Yeah, Kid, I Know How You Feel 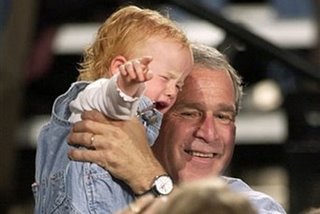 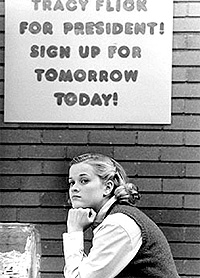 Oh boy, election season! OK, living in Maine has its advantage this year because all of our races have been pretty much decided way in advance. There's no down-to-the-wire contests this time around. Senator Olympia Snowe (R) is safe, as are the state's two representatives (both Democrat). Personally, I wish the Republicans had come up with a good challenger to our current governor (cousin to writer David Baldacci [just keeping this within the crime fiction theme]), or the Dems had someone else in the primaries. Instead, we're left with an incompetent dufus and a medieval moral inquisitor. It sucks, but I'm going with the dufus, who is going to win. There was never any danger that he would be voted out.

So, the real drama will be elsewhere. Actually, that's fine with us. We'd rather have boring elections than the circus freak shows the rest of the country is having. The only anxiety for us is the balance of power in Washington. The Dems are riding high thanks in equal parts Katrina, Iraq and Jack Abramoff. Every pundit out there is saying that they will win back the House and maybe the Senate as well. But I don't think the Dems will win as big as they are thinking they will for a couple of reasons:

1. The Dems are cashing in on the Republicans' mistakes. It isn't that they have a better plan, or any plan; they're simply not Republicans - that's what they have going for them. The talk of the election season is not about the Democrats' ideas, but how the party in power fucked up. Do the Dems even have a cohesive plan? That one thing about the Republicans in power now, they may be corrupt, hypocritical liars, but they've been consistent about it.

2. Despite the corruption, bungled foreign policy, racism (of some) and lies; the Republicans are still in the race. There's no way they should be neck-and-neck with their Democratic challengers. Has there been a more bungling idiot Senator out there than George Allen? Macaca. Refusing to admit he's Jewish (even going as far as to insist that he eats pork whenever he can). Dedication to the Confederate Flag. Free usage of the word 'nigger.' As of this morning, he was trailing by 1 percentage point. One! Now, don't get me wrong, besides his failings as a human being, the man is a terrible senator - that alone should be qualification enough to get your ass kicked out of office. Another great senator is Conrad Burns. He has the stink of Jack Abramoff all over him, but Montana is another close race.

3. Borat. Yes, that's right, the fake journalist from Kazakhstan played by comedian Sacha Baron Cohen. There is no better proof of America's continually misguided (to say the least) views of race and sex than this weekend's #1 box office hit. Kazakhstan has gone on an aggressive PR campaign to challenge the fictional depiction of their country, while it should be the U.S. that should be on the defensive due to the factual depiction of our country. Racism and sexism are alive and well in America, despite our best efforts to deceive ourselves. Take the Tennessee Senate race. The attack ads against candidate Harold Ford, Jr. have been rightfully categorized as racist. (As a Mainer, I'm pretty proud that one of our former Senators, Bill Cohen, a Republican, was one of the first people to call the ads racist.) Oh no, Harold is single and he's looking for a white girl with jungle fever! Despite the genuine outrage, I think the ads have actually worked. Look at the current polling numbers: Ford is behind by 12 points. This used to be a tight race. Attention Obama, this is the kind of uphill battle you're going to have on your hands.

4. The bankruptcy of Air America. This was a grand, and ultimately unsuccessful experiment to battle against conservative radio. But while they may have had a small, dedicated following, it wasn't enough for large corporations to act against their own interests and advertise on the liberal network. If Al Franken was able to attract enough of his own 'dittoheads', then the companies may have bought more ad time. Now, prepare yourself, I'm going to give you the general stereotype of a typical conservative radio listener: they're called 'dittoheads' for a reason, they have no mind of their own. They are nothing but drones that laugh or scowl at whatever Rush or Hannity tell them to. OK, this doesn't describe all republicans, only those who don't think for themselves. This is a huge advantage for Republicans - voters who will do whatever they say. But the Dems will never be able to count on that. Sure, there are plenty of Democratic dittoheads out there who will do whatever the Dem leaders tell them to (but since those leaders are usually at odds with themselves, it's a wonder that those dittoheads haven't lost their heads all together); but the Democratic party is full of people who more often than not, think for themselves - a difficult condition when a party is trying to manipulate the herd. Now, that isn't to say the GOP doesn't have its own problems with independent thinkers. Case in point: New England Republicans. They are typically fiscal conservatives who don't give a shit what you do with your life (the reason Olympia Snowe (R) will get my vote) - an opposite opinion of the current GOP in power who are outspending every Democratic administration and Congress in history and will do whatever they can to stop boys from kissing.

5. The New York Times Best-seller List. The same week that State of Denial, Bob Woodward's fairly objective account of the Bush Administration's handling of the war in Iraq, came out in bookstores; Bill O'Reilly's latest ignorant rant against liberals was also published. Woodward's book hit like a bomb. There were a ton of juicy tidbits in the book. Pundits were talking about how Bush was fucking up left and right. Other than the O'Reilly Factor, there wasn't much airtime for Bill's book. Even Bill himself said that Woodward's book was overshadowing his own. And when the NYTimes list came out for that week when both books debuted who do you think was #1? Yes, Bill was. So, more people who went to the bookstore that week to pick up a book on current events bought Bill's rehashed garbage over Woodward's cause celeb. What does that tell you about the general public?

Will the Dems win the House? I think so. The House of Representatives is full of populists anyway. Whichever way the wind blows, the House will follow right behind it. It's the chamber's purpose in our government. It represents the current mood of the population, which is why all reps need to seek re-election every two years. And it will sway back the other way in two years, when the Dems screw up as much as the GOP has.

Will the Dems win the Senate? I doubt it. They need to pick up six seats to control the Senate. It won't happen. The Senate doesn't bend with current attitudes. It was designed to move slower, more thoughtfully than the House. It is the wise sage to the rambunctious House reactionaries. That's the reason only a third of the Senate is up for re-election every two years and Senators serve a six-year term. If the Senate does move toward the left, then that would be a real indication of how the country is moving in the long run.

With all that being said, I hope like hell the Dems do win back the House and the Senate. Our government is set up with such divisions for a reason. If one party rules all the parts of government (Congress, Executive and Judicial) then the checks and balances the Framers worked so hard to establish is diminished. One party, one idea was never meant to run the entire country. I believe in a divided government, with one party in control of the Presidency and one party in control of both (or at least one) chambers of Congress. In an ideal world, the Court would be above politics, but we all know that while Justices like Thomas, Scalia (or as his friends call him, Beelzebub) and Ginsberg are on the bench, that will never ever happen.

So, I'll be glued to the television all day Tuesday, switching from MSNBC to CNN to Headline News, and finally to Fox News and Comedy Central for the laughs. I guess we'll have to wait and see what happens in the next 48 hours. I can't wait because this is the time of year when I can actually use my poli sci degree for something: annoying others!
Posted by Steve Allan at Sunday, November 05, 2006 5 comments: