Above my desk is a poster of Butch Cassidy and the Sundance Kid, one of my favorite movies. It's the freeze frame ending of the movie where Butch and Sundance rush out to fight the Bolivian Army. Redford is a pretty good actor, I've always liked his work; but it's Newman who makes that movie. It's Newman who makes The Sting, he makes Absence of Malice, he makes Slap Shot and every other movie he starred in. Now he won't star in a movie ever again. Very sad. 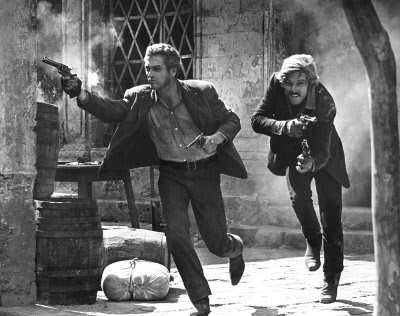 Why do news organizations immediately go to someone in each of the opposing camps and ask their opinion on how the debates went? Are they expecting one of them to go, "Well, shit, my guy totally fucked up and I gotta say, after listening to his opponent, I'm gonna switch sides." No. Their guy could have shouted out, "I'd suck Bin Laden's balls!" and they'd still say he won. What's the point? The same goes for the commentators on staff. Really, Pat Buchanan thought McCain won? I am abso-fucking-lutely shocked. I want someone to give me a honest assessment.

OK, I'll tell you that I think Obama won, but I'm biased. So, read this with a grain of salt.

Obama did win, but only by the skin of his teeth. He wasn't strong going into the first twenty minutes of the debate - he seemed to be treading water. I think there were a ton of opportunities to attack McCain, but he let them all slip away. McCain on the other hand, may not have beat Obama, but he came away with a great success - he didn't lose the entire election, which was the direction he was heading in this week. He put his campaign back on track after this odd "senior moment" of the non-suspension campaign suspension and swooping into Washington with enough political theater that House Republicans could stage their revolt. (OK, they probably would have revolted anyway, but McCain's presence sure as shit appeared to be the catalyst) and the whole will he or won't he suspense about attending the debate at all. Not to mention pissing of David Letterman - which may actually have caused more lasting damage than anything else. Who wants a national personality with a nightly show seen by millions of voters crapping all over you Monday through Friday from now until the election?

So, no real fireworks. They both got in a few jabs and both stumbled. Obama benefitted from finally finding his footing and strengthened during the last half hour - which may have swayed my thinking he won. But it's next Thursday's debate which will be the fun one. Palin v. Biden. What kind of shenanigans will the McCain campaign pull to deflect from that? Will he pull her and put Rudy in her place? Hmmm...
Posted by Steve Allan at Saturday, September 27, 2008 3 comments:

For my contribution to Patti Abbott's Friday Forgotten Books this week, I suggest Adam Smith's Wealth of Nations because it seems some people have forgotten that it's the backbone of their entire economic philosophy. 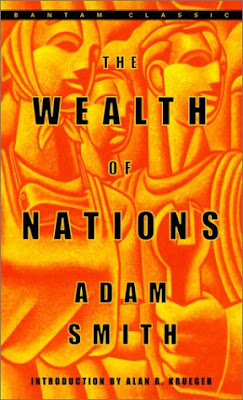 A Poem by Sara Palin

That Alaska,
a very narrow maritime border,
between a foreign country: Russia.
And on our other side, the land-- boundary that we have.
Canada, it… it's funny.
A comment like that was kind of made to…
I don't know,
you know, Reporters?
Yeah, mocked,
I guess that's the word,
yeah.

Our next door neighbors are,
foreign countries.
They're in the state that I am the executive of.
And there in Russia.
We have trade missions,
back and forth.
We, we do.
It's very important,
when you consider,
even national security issues with Russia.


As Putin rears his head,
Comes into the air space of the United States of America.
Where? Where do they go?
It's Alaska.
It's just right over the border. It is.
From Alaska that we send those out,
to make sure that an eye is being kept.
This very powerful nation, Russia.
Because they are right there.
They are right next to our state.

Armageddon It - A Political Rant

Holy shit, the world is coming to an end. Save us Henry Paulsen! What do you need? $700 billion and absolute power? You got it.

Wait, let me get this straight, these big wig capitalists - including the first MBA President - want a socialized solution to this mess? The United States Government now owns an 80% share in AIG. We own one of the largest insurance and financial companies in the world, and the government has an actual say in how the business is run. Even Eugene Debs has risen from the grave to say, "What the fuck?"

OK, this isn't exactly communism, but it isn't exactly capitalism - it's something in between, a socialism that's nationalized, a kind of national socialism, if you will. I believe another country dabbled in a similar scheme sometime around the first half of the Twentieth Century. Can't remember much about it (damn my public school education), but I think they also had a bone to pick with the Jews.Oh, it'll come to me.

Can someone please tell me how we can bail out these millionaire fuck ups (the air will be filled with golden parachutes), but there are still children in this country who go hungry and don't have adequate medical care? I mean, if we're heading for a socialist nation why not fix a few problems along the way? If we're going to say to hell with our economic ideals, why not do some good on our pathway to a socialist Hell?

And what is Congress doing? They're speeding this bail out along because they've been told the sky is falling - and they want to recess to campaign, so they'll just go back to Washington to do the same nothing they've shown such a knack for doing. There is no doubt that a bill will be passed, probably as soon as this weekend without a whole hell of a lot of discussion - or at least not any constructive discussion [But hey, there's a Presidential debate happening friday, so that should give us a real national discussion about this problem... what's that? They're only focusing on foreign policy? Really? The biggest economic crisis is currently happening and they're not going to talk about it? What the fuck?]. I bet the vote to approve this bail out will occur somewhere around 1:00 in the morning, you know the same time of night last Saturday the Treasury Department released their $700 billion, no strings attached, the Treasury Secretary becomes the most powerful person in the U.S. government request.

Thank god there's a presidential election coming up with two highly qualified candidates... what's that? Economy is one of McCain's weaknesses and Obama hasn't proven himself on that front either. Well at least Sara Palin has a strong grasp of responsible public spending... what's that? Put her town of 6,500 people $20 million dollars in the hole during her one term in office. You'll excuse me while I breakdown and cry. At least she had a crash course in foreign policy yesterday with meeting with some foreign heads of state, like Henry Kissinger. Hell, she was probably wondering which country Kissinger ran. The funny dude has a weird accent, so it's got to be from somewhere across the Atlantic, right?

OK, I'll let you in on a little secret about how to follow politics without becoming an alcoholic or a meth addict (I mean, look at the way the people in Wasilla handled Palin's role of mayor) - the secret is to have a sense of humor... and no investments.
Posted by Steve Allan at Wednesday, September 24, 2008 3 comments:

I have a piece of paper Dennis Lehane gave me during my first graduate workshop; it's probably the best bit of writing advice I've ever received. On that paper he listed a number of authors and books he thought I should read. The book at the top of that list: The Last Good Kiss by James Crumley. I've since read it about four or five times. I even wrote part of my MFA thesis on it. I was hooked on Crumley, and I went and read everything. I introduced my grandfather to Crumley and he quickly became one of his favorite writers, along side Elmore Leonard.

I've encountered many writers who can recite, if not exactly, then at least in some close facsimile of it, the opening lines to The Last Good Kiss. Everyone of them remembers the bulldog. Crumley was one of the first writers to usher in the modern era of the crime novel. C.W. Sughrue and Milo Milodragovitch were different kinds of heroes (if one could really call them that) than their predecessors. They were most definitely flawed characters who struggled with life more than they struggled with whatever crimes they were investigating. After reading about Sughrue and Milo, well, one could never look at a crime novel the same way again.

I was shocked yesterday to learn that Crumley had passed away. He was the second major influence to have died in the past week; the first being Gregory McDonald. I owe a lot of my writing style to McDonald, as well as my understanding of dialog. Hell, I wanted to name my son Fletcher at one point.

I don't know why the passing of these men has affected me so much, after all I didn't know either of them on a personal level. Maybe because writing becomes a sort of personification; a representation of its creator, and when a book or story has any type of impact we feel connected to the writer. Perhaps it's similar to having a crush on someone - it's a rather selfish endeavor in which we are the only ones who take pleasure in it, the only ones who derive any meaning from such a frivolous bond, which is often non-existent, only a one-way relationship.

But whatever the reason for my connection to these two writers, I still feel that something in my life that once was there is no longer. A sad time, indeed.
Posted by Steve Allan at Friday, September 19, 2008 1 comment:

I don't think I'll ever finish Infinite Jest. I bought the book when it first came out in hardcover 12 or 13 years ago and have made numerous attempts at reading David Foster Wallace's behemoth. The book now holds a permanent place on my TBR pile. I'll do it someday, at least that's what I keep telling myself. But I'm like a pathetic mountaineer who can't even make it to base camp at the foot of Everest. I've made it to page 200 a couple of times (with the endnotes, it's more like 250), but other, shorter books have pulled me away. Will I finally achieve my goal of finishing IJ now that Wallace is gone? Highly unlikely. But I may finally finish The Broom of the System.
Posted by Steve Allan at Monday, September 15, 2008 1 comment:

The more I watch and listen to Sarah Palin, the more she reminds me of those book burning idiots who want to ban Catcher in the Rye and The Golden Compass from the local library. But hey, Banned Books Week is coming up so maybe she'll come out and tell us how much she loved The Chocolate War ... watching it burn. But I was half-surprised (half-not surprised) to learn that my instinct was correct.
Posted by Steve Allan at Thursday, September 04, 2008 3 comments: