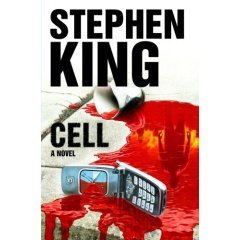 I received Stephen King's Cell from Amazon yesterday and I had to stop reading everything else I'm in the middle of to start it. Oh, it is so nice and violent - just everything you wish a King book to be.

I don't think I would be a writer if it weren't for Stephen King. I was hooked on his novels at a very young age (I read Salem's Lot when I was in the fourth grade) and I've been reading ever since. I have no idea how much growing up around the Bangor area influenced my exposure to him and his books, but I assume it had a major part. Now, if I had grown up around, say, Jackie Collins, god only knows what I would have wanted to be when I grow up - a Hollywood Husband, I suppose.
Posted by Steve Allan at Saturday, February 25, 2006 No comments:

I've been trying my best to read as many of the books nominated for Edgars this year as I can. So far, I have gotten through The Lincoln Lawyer by Michael Connelly, Drama City by George Pelecanos, and mid-way through Citizen Vince by Jess Walter (I started it last night). I have to get Tess Gerritsen's Vanish from my mother. She's been reading it since she went to one of Tess's book signings before Christmas. I haven't even ordered Red Leaves by Thomas H. Cook. I hear mixed things about it.

As for my pick, I would love to see Pelecanos win. However, as much as I really enjoyed Drama City, I don't think it was his strongest book (But, even the least of his books outshines most authors' best).

The Lincoln Lawyer was very good, and I finished it in only a couple of sittings, but it lacked the character complexity of his Harry Bosch novels. Of course, since it was written in first person POV and it is about a slick lawyer, how deep of an interspection would you expect? The story was fantastic. And as I think about it, I'm still amazed by Connelly's tight plot. But he has always been very good.

Citizen Vince is pretty good so far. I like the main character and I like the setting that Walters has created. The 1980 Presidential race backdrop is just perfect. I can't wait to finish it this weekend. Of all the books in this category, I'd say this one is the closest to my own stories.

As for Tess Gerritsen, she is a very nice lady and I would be so happy for her if she won. I've enjoyed her other books, but like I said, I haven't read this one yet. I will, though.
Posted by Steve Allan at Friday, February 24, 2006 No comments:

From Where You Dream

I've been reading Robert Olen Butler's From Where You Dream with some interest. I like his suggestions of finding the zone when you write and how to use cinematic techniques to better your writing. It's nice to find a craft book meant for a more advanced writer, but he tends to shit on genre writing. He even calls genre writers non-artists. It's funny how much snobbery popfic students have to put up with to learn the craft. And let me tell you, MFA programs are the worst.
Posted by Steve Allan at Thursday, February 23, 2006 1 comment:

Just finished Ken Bruen's The Magdalen Martyrs. It's as brilliant as the first two Jack Taylor books. Man, I wish I had just a fraction of his talent. The fourth book, The Dramatist, comes out in hardback in a couple of weeks. I don't think I can wait for the paperback this time.

Next up: Fleshmarket Alley by Ian Rankin.
Posted by Steve Allan at Wednesday, February 22, 2006 No comments:

I can't believe no one has taken Noir Writer. Oh well, it's mine now.
Posted by Steve Allan at Tuesday, February 21, 2006 No comments: