There Are Just So Many to Choose From: More Best of the Decade

If I had made a Best of the 1990's list, there would be a hell of a lot more independent and foreign films than I have for the current decade that's fading away. I saw everything that came out; going to the movie theater at least twice a week. Now, I barely go once a month, and then it's to see something like Cloudy with a Chance of Meatballs (don't be disappointed, but it isn't on the list). Looking over the list I have compiled, there aren't as many indies and very few foreign films. Sorry about that.

But to get to the top 25 quicker, let's list the rest of the runners-up.

Dancer in the Dark

A History of Violence

The Life Aquatic with Steve Zissou

While Gus Van Sant's Elephant won the Palme d'Or at Cannes, I think this film is better. This story of a teenage skateboarder who commits manslaughter is absolutely mesmerizing to watch. With films like this and the riveting Milk, Van Sant has transcended from mere film director into a true artist.

The Tao of Steve

A movie that theorizes that all guys named Steve are awesome. I can't understand why I would want to include it here.

Oh, so greatly under appreciated. Though it lacks the unique magic of Ivan Reitman's earlier movie Ghostbusters, which it closely resembles, Evolution is none the less a really fun movie to watch.

No Country for Old Men

Anchorman: The Legend of Ron Burgundy

But avoid Brett Ratner's dog turd of a sequel, X-Men: The Last Stand.

What Planet Are You From?

As good as Bennett Miller's Capote was, Douglas McGrath's take on Truman Capote's efforts to write In Cold Blood was actually better. Philip Seymour Hoffman took home an Oscar, but Toby Jones was born to play the role. If this film had made it to theaters first, Hoffman would probably still be waiting for an Oscar.

More Runners-up, Best of the Decade

The continuing the list of great movies of the decade, but didn't make the top 25:

It's hard to put the superior Spider-Man 2 on the list and not include the first. It's like Godfather part II without the original. Instead of coasting on the success of Spider-Man, the second movie expanded on the mythology and added further complexity to the characters. The third film tried to do the same, and who knows, without the emo Peter Parker it may have fared better, but ultimately, it suffers in part 2's shadow. One complaint: Did we really need a shirtless Alfred Molina?

Anyone who has watched any of director Julie Taymor's other films (Titus, Frida) knows the woman is a true cinematic visionary, and this movie further proves that genius. What superficially looks like a weak premise (stringing together a movie based on Beatle's songs), proves to be a wonderful experience of fantastic visuals, great music and heartwarming storytelling.

*originally released in October of 1999. OK, not technically a movie from this decade, but the film missed the mark by 2 1/2 months and has become such a phenomenon that it deserves a place somewhere. (My fairness trigger wouldn't allow me to place this in the top 25 - it would have been closer to top 5, but I feel comfortable with it listed here). This film is not only a kick ass movie, it has become a modern male anthem about apathy, internal disappointment and searching for meaning. This is a case of the perfect director with the perfect material aided by the perfect cast. David Fincher's masterpiece is a lot more playful than Chuck Palahniuk's novel, but doesn't lose any of the edginess of the original story. I'll admit, I wasn't really blown away by the movie when I saw it in the theater, and looking at the box office, no one else was either, but the more times I watched it, the better it became. I've probably seen this movie about 30 times over the past ten years, probably more than any other film on this list.

Best of the Aughts: More Runners-up

Some more runners-up of the best movies of the decade as decided by me, because this is my blog. Again, no particular order:


Ghost Dog: The Way of the Samurai

This one nearly made the top 25. Ang Lee's heartbreaking film about a love affair in an environment of intolerance and ignorance should have won Oscars for Best Picture and for Heath Ledger's powerful performance. Instead, the homophobic yet, self-proclaimed, self-congratulatory "liberal" Academy voters, most of whom are well past the age of ancient, chose that shit bird movie of pretension, Crash. One of the biggest blunders in Oscar history.

In what could have been just another dimwitted stoner movie, Harold and Kumar actually did something quite admirable: it showed that minorities in movies don't have to be staid stereotypes required to represent their race; rather they could be your average, everyday schlubs who just want to get toasted and chow down on some tasty sliders like everyone else. The sequel, Harold and Kumar Escape from Guantanamo Bay went even further by tackling racial stereotypes and American attitudes toward, well, just about every minority, but the simpler premise of the original was subversive enough to promote diversity without making people think that's what it was doing. 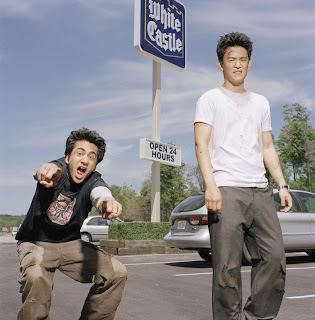 O Brother, Where Art Thou?

The Best Movies of the Last Decade

American Film, a great magazine I wish was still around, surveyed a number of critics in 1989 to establish a Best Films of the 1980s list. This list was very influential to me as my understanding of the art of cinema was still forming. I was branching away from the mainstream and finding enjoyment from films off the beaten path. Movies that weren't shown anywhere near where I live (and still aren't), but thanks to the family VCR and magazines like American Film, Premiere and Film Comment; I was able to establish a great understanding of film - it was an obsession.

Anyway, I thought I would post a list of the best movies I've seen over the past ten years as a sort of homage to that American Film list. Now, I haven't seen as many movies as I once did. This list won't have as many smaller, lesser known movies as a list concocted of the films of the 1990s, but I think there are some really special ones here. I'll list some of the runner-ups over the next couple of days and post individual comments on each of my top 25 films. Hopefully one a day (or so) until the end of the year.

Here are a few to get started. These are in no particular order:

United 93
The Whole Nine Yards
The Wrestler
Shaun of the Dead
Eternal Sunshine of the Spotless Mind
Whale Rider
The Machinist
Gosford Park
Ali
Igby Goes Down
Posted by Steve Allan at Wednesday, November 18, 2009 No comments:

I Swear I've Been Busy

My God, it's been over 5 months since I posted on this thing! OK, I have been busy writing, not every day, or even every week, but it has been constant. And the writing hasn't focused on short stories, hence the reason for the lack of published stuff out there recently. No, I've focused on the two books (I know, I know, work on one at a time, but I'm a rebel). The good news is that I'm getting close to the finish of one, but the sacrifice has been blogging and keeping up with other blogs. It was either that or completely ignoring the entire family; that wouldn't have been too bright. So, in order to get back into this thing, I'll try to post a few things over the next month and a half; but it's not going to focus on writing - for the moment. From now until the end of the year, I'm going to list my best movies of the decade. I hope you'll enjoy it.
Posted by Steve Allan at Wednesday, November 18, 2009 No comments: