I received a rejection yesterday. Not the first time, won't be the last. But what's different about this one is that it hasn't phased me. It could be the lack of sleep, but I don't feel anything. Other rejections have always put me in a pissy mood. I wasn't fun to be around for the first few hours after receiving a rejection letter. Last night and today - nothing. I'm just going to print out a new copy of the story and submit it somewhere else. Am I reaching a new point in my writing career (as young as it is)? Am I getting callous? I haven't sent out as many submissions as I should have over the past year, but has it been enough to reach this indifferent phase? Is it a good sign? Who knows? But being this comfortably numb sure makes it a lot easier.
Posted by Steve Allan at Wednesday, August 30, 2006 5 comments:

Baby Steps Back Into Writing

I wrote my first new piece of fiction since I graduated with the MFA degree in July. It's a flash entitled The Tree Doesn't Fall Far From the Apple and appears on The Clarity of Night website. It's actually entered into a flash contest that's being judged by Anne Frasier. Wish me luck.

Another short story of mine will show up (hopefully) within the next couple of weeks.
Posted by Steve Allan at Monday, August 28, 2006 4 comments:

Why The Hell Not?

OK, so everything points to complete failure for this gamble, but what the hell? Maybe they haven't received anything good lately. Maybe the fiction editors just pin stories on a wall and throw darts at them to pick the stories that go in the magazine. Maybe it's monkeys-take-over-the-magazine day and some primate chooses my story - and then decides to fling poo at Anthony Lane.

I can see it now: toast of the town; the literary event of that week; respect from some of the biggest writers today; the strippers!

I guess I can always blame this on the lack of sleep.
Posted by Steve Allan at Thursday, August 24, 2006 3 comments: 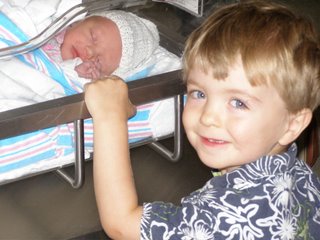 I am so goddamn tired it isn't funny. Lorelai is so cute, but my god the kid can't sleep for more than an hour at a time before she's hungry again. Right now I want to fall asleep at my desk. My eyelids are at half-mast and I have large dark circles under my eyes. Why is it that I've forgotten how sleep deprived I was with the first one? Of course, next to his little itty bitty sister, he seems like a giant; like he grew three feet on the day Lorelai was born. But he is so great with her. He gives her soft kisses and really gentle hugs. How long can this last before they're fighting? Is it too much to hope that they'll wait until college?

But new baby means no writing. I originally had an extra couple of weeks before she came, but she was impatient and wanted out last week. Oh well, that means I'll be back at it sooner, I guess. I did try to write last night, but ended up watching movie trailers on the Quicktime website (The geek in me can't wait for Teenage Mutant Ninja Turtles) and browsing itunes (added Jane's Addiction and Sonic Youth) - all with the baby in my hands. I glanced at a couple of stories in progress, but that was about it. I also have to get off my ass and apply for some adjunct faculty positions (have MFA, will travel).

I guess I'll take some kind of a nap this afternoon and force myself to do some work today.
Posted by Steve Allan at Tuesday, August 22, 2006 7 comments: 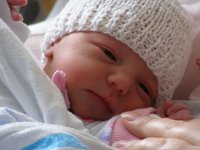 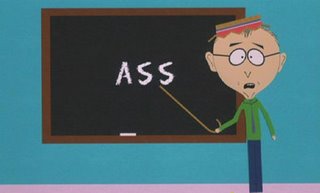 I received the student evaluations of my graduate seminar on anti-heroes in noir fiction in the mail yesterday. They were pretty good with little complaints. Most of the comments on the weaknesses of the seminar were about my nervousness. I have to admit that I was not in prime form at the beginning of the seminar, but as it went on I think I was more comfortable. Another criticism was the limited time, which I've been complaining about since the beginning. Student seminars are only an hour long, while the faculty seminars are an hour-and-a-half. (And the student ones are usually more in depth, so it doesn't make sense - but then again, that's the logic of the program, by which I mean there is no logic) I really wished I had an extra half-hour so I could have gone into how to develop anti-heroes more.

People seemed to have liked the use of clips from The Untouchables. Anything to avoid reading. And apparantly, I seemed to know what I was talking about. Thank god I was able to fool everyone.

The funniest comment was my use of curse words. "Clean up the language." What a fucking load of shit. I read some lines from a couple of books and quoted a few people. My favorite was a quote by James Ellroy who said he "wanted to give crime fiction back to the shitbirds of history." Someone didn't appreciate Mr. Ellroy's comment. Too bad. Earlier in the semester there was a huge exchange on the MFA program's listserv about people swearing in postings. That really pissed me off, but that's another entry for another day.

Here are some lines from recent reads:

"No, this is not a good town for psychedelic drugs. Reality itself is too twisted."
- Hunter S. Thompson, Fear and Loathing in Las Vegas 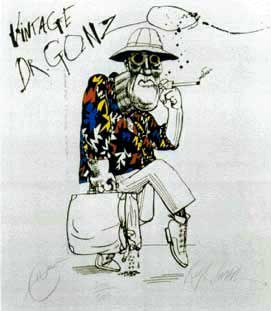 "For this my mother wrapped me warm,
And called me home against the storm,
And coaxed my infant nights to quiet,
And gave me roughage in my diet,
And tucked me in my bed at eight,
And clipped my hair, and marked my weight,
And watched me as I sat and stood,
That I might grow to womanhood.
To hear a whistle and drop my wits
And break my heart to clattering bits."
- Dorothy Parker, Fulfillment 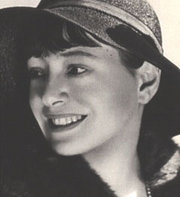 "But there was a single can of condensed milk, of a richness and sweetness Jim had never remembered. He drank the milk, sitting at the desk in the dentist's study as the teeth smiled at him, and then fell asleep in a bedroom upstairs, between the silk sheets scented by the body of the woman with the face of a film star."
- J.G. Ballard, Empire of the Sun 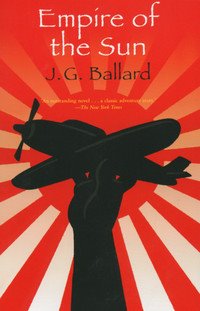 "In most cases, people, even the most vicious, are much more naive and simple-minded than we assume them to be. And this is true of ourselves too."
- Fyodor Dostoevsky, The Brothers Karamazov 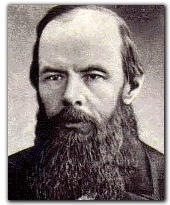 "Myers giggled.
'If you were a real writer, as you say you are, Mr. Myers, you would not laugh,' Morgan said as he got to his feet. 'You would try to understand. You would plumb the depths of that poor soul's heart and try to understand. But you are no writer, sir!'
Myers kept on giggling."
- Raymond Carver, Put Yourself in My Shoes 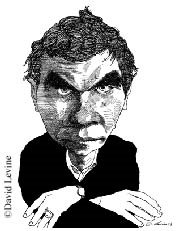 "Lolita, light of my life, fire of my loins. My sin, my soul. Lo-lee-ta: the tip of the tongue taking a trip of three steps down the palate to tap, at three, on the teeth. Lo. Lee. Ta."
-Vladimir Nabokov, Lolita 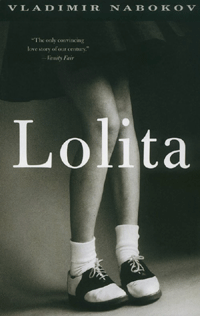 Apparently, the blogosphere is a buzz (three people equal a buzz, right?) about a report of my alleged affair with Ann Coulter. I am here to annouce that yes, I have been with Ann Coulter - and she has impregnated me with her demon seed. Our "child" now grows within me and we will unleash it upon this world by the end of the year.
Posted by Steve Allan at Wednesday, August 02, 2006 4 comments:

The Save Harry Potter Fan Club 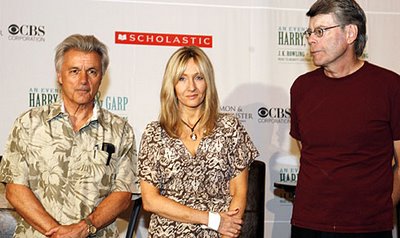 Why do I find it so funny that John Irving reads Harry Potter? According to a Reuters article, both John Irving and Stephen King are urging J.K. Rowling not to kill off Harry Potter in the seventh book of her popular series.

"My fingers are crossed for Harry," Irving said at a joint news conference before a charity reading by the three writers at New York's Radio City Music Hall.

I knew King read the series (bits of Potter's universe show up in the Dark Tower series), but Irving?
Posted by Steve Allan at Wednesday, August 02, 2006 6 comments:

Did I Mention I Was Related To Edgar Allan Poe?

So, what does that make Edgar and me? Well, probably nothing. But it's a cool family story, none the less.
Posted by Steve Allan at Tuesday, August 01, 2006 5 comments: