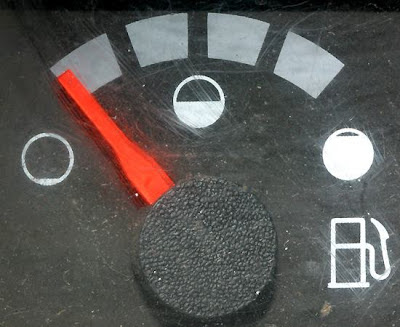 A little while ago Patti Abbott forwarded a call for Flash Fiction stories with the following prompt: "With gas/ (diesel/petrol) prices rising, our (their) plans had to change." And I forgot all about it...until Patti e-mailed me Friday. Anyway, here's my contribution. It was written in under an hour so judge it too harshly.

With the price of gas rising, our plans had to change. The Sheriff decided that high-speed pursuits weren’t worth the trouble and if someone wouldn’t pull over as soon as they saw the flashing blues, then to hell with it. He’d rather have a good looking budget to show the county commissioners than adding a few more arrests to the monthly report.

To accommodate the new policy, three of us deputies covered the fifteen-mile stretch of Route 1 that ran through Quoddy Harbor, the county seat of Quoddy County. One patrol unit, usually Sheriff Timmy Kelley, sat near the Penobscot County line, hidden by the large Welcome to Quoddy County sign; another, Tommy Kelley (yes, they’re related), parked in the Shop n’ Save parking lot and the third, that would be me, sat on the other side of town. If a motorist broke the speed limit, one of us would shoot out of our selected hiding places and pull over the offender. We never went more than a few hundred yards – at least not during the first week.

Have you ever heard of Ben Sonnenfeld? Yeah, I thought you had, I mean who hasn’t? How can you not have heard of a guy who’s robbed a dozen banks and escaped the FBI as many times as Sonnenfeld? The guy’s damn face was plastered on the TV news for a month. Well, anyway, he’s the reason our weeklong streak of not exceeding a few hundred yards was broken.

I can’t begin to tell you about the fluttering I felt in my chest when I heard that Sonnenfeld had been sighted in our part of the country. I kept imaging pulling a gun on the famous criminal and then slamming the cuffs on him. I thought about the photographers’ lights popping as they shot pictures of the two of us walking into the jail. Hero, that’s what they would call me; probably even put it on the front page of the next day’s paper in big letters. That would be pretty sweet. Something I could show all those assholes who laughed at me – and all the girls who wouldn’t even acknowledge me. I was even thinking about plastering all of Sally Wood’s windows with copies of the headline when Sonnenfeld’s famous yellow Camaro raced past me at 70 MPH.

“Holy shit,” I said as I flipped the lights and stamped down on the accelerator. I hit the siren and it screamed as I followed Sonnenfeld into Quoddy Harbor. I yelled into the radio that I was tailing none other than Ben Sonnenfeld.

“Watch your gas,” Sheriff Kelley said. I ignored him and pressed harder on the accelerator. When Sonnenfeld and I rushed past Tommy, I was only a dozen car lengths behind the infamous bank robber.

“Daddy, he ain’t slowing down,” Tommy’s voiced squawked on the radio.

“Goddamn it,” the Sheriff yelled. “I told you to watch your gas.”

“But this is Ben Sonnenfeld,” I said into the radio.

“I don’t care,” the Sheriff said. “We only got so much in the budget.”

We were speeding toward the County line where Sheriff Kelley was perched by the town sign. “Coming your way,” I said. At that moment I saw the Sheriff’s light bar spark up. Sonnenfeld was pushing 90 and I was right there with him. Then I watched as the yellow Camaro went right by the town sign and the Sheriff pulled out into the road and stopped, blocking my path.

I hit the brakes, twisted the wheel and stopped about ten feet from my boss’s cruiser. I flew out of the car and watched the red taillights of Sonnenfeld’s Camaro fade in the distance; all of my dreaming fading with them.

Sheriff Kelley got out of his cruiser and pointed his finger at me. “I keep telling you we only got so much money in the goddamn budget.”

You showoff! Under an hour? You're amazing! I'll put the link up.

He only had four lines, but that Sheriff Kelley is a real jerk. You had me pulling for the narrator the whole time. I like it!

I thought for sure the narrator would catch Sonnenfeld. Always love a good chase.

A story in an hour. Wow. You could've fooled me. This was great/

Marijuana can produce several different kinds of fuel. In the 1800's and 1900's hempseed oil was the primary source of fuel in the United States and was commonly used for lamps and other oil energy needs. The diesel engine was originally designed to run on marijuana oil because Rudolf Diesel assumed that it would be the most common fuel. Marijuana is also the most efficient plant for the production of methanol. It is estimated that, in one form or another, marijuana grown in the United States could provide up to ninety percent of the nation's entire energy needs.
Source: Schaffer Library of Drug Policy

Hemp is 4 times more efficient than corn as biofuel. Hemp pellets can be used to produce clean electricity.

... all people connected with or interested in improving the quality of life on our planet should be aware of it... so powerful it could replace every type of fossil fuel energy product (oil, coal, and natural gas).

... grow biomass (biologically produced matter). This plant is the earth's number one biomass resource or fastest growing annual plant for agriculture on a worldwide basis, producing up to 14 tons per acre. This is the only biomass source available that is capable of producing all the energy needs of the U.S. and the world...

Hemp will produce cleaner air and reduce greenhouse gases. When biomass fuel burns, it produces CO2 (the major cause of the greenhouse effect), the same as fossil fuel; but during the growth cycle of the plant, photosynthesis removes as much CO2 from the air as burning the biomass adds, so hemp actually cleans the atmosphere. After the first cycle there is no further loading to the atmosphere...
Source: USA Hemp Museum
JOIN THE EMAIL LIST, COMMENT ON THE BLOG AND WATCH THE VIDEOS ON THIS WEBSITE:
Internet Explorer: http://jsknow.angelfire.com/home
Other Browsers: http://jsknow.angelfire.com/index.html