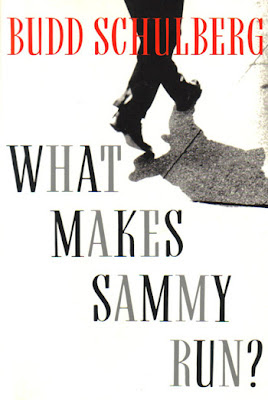 Published in the early 1940's, Budd Schulberg's What Makes Sammy Run? is probably still the best novel about Hollywood, even surpassing his contemporary (and one time collaborator) F. Scott Fitzgerald's The Last Tycoon. It tells the story of a ruthlessly ambitious boy, Sammy Glick, who backstabs his way to the top of the Hollywood studio system. Glick is such an interesting character, one who fascinates the reader without earning any sympathy.

Some, including Samuel Goldwyn, criticized the book as being anti-semetic, calling Schulberg a self-hating jew for writing it. In truth, the character of Glick would be just as wicked if his last name was McCoy. Besides, Glick being a jew has little to do with the actual story. However, the book was enough of a catalyst for MGM to fire Schulberg.

What is more interesting in terms of the novel's plot in relation to Schulberg's own life was the topic of socialism and unions within Hollywood during the 1930's. The struggle between union coordinators and the studios has a major part in the book, with a more favorable view of union organizers. But Schulberg would later testify voluntarily in front of the HUAC and named names, including many of the infamous Hollywood Ten. (This would not be Schulberg's last brush with history - in 1968 he would be one of the men who wrestled Sirhan Sirhan to the floor after the gunman shot Robert Kennedy.) Schulberg would later collaborate with another famous HUAC witness, Elia Kazan, in writing On the Waterfront. The film has long been categorized as Kazan and Schulberg's answer to the criticism they received for testifying since the movie is about an informer ratting out his friends.

But besides Schulberg's history of contridictory politics, Sammy is still a great book; one of my favorites. Well worth a read.
Posted by Steve Allan at Thursday, July 31, 2008

If there was ever a book on this list that I have meant to read, this is it. I will read it.