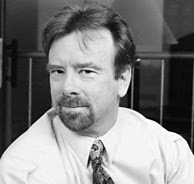 I know it's been a few weeks since I last posted an interview, but I took a little time off from this because I wanted to focus on other things. However, you are in for a treat because today's guest is science fiction writer James Patrick Kelly. The author of many, many, many sci-fi short stories, Jim is a master of the form and could go toe-to-toe with any other short story writer out there. Check out both of his story collections, THINK LIKE A DINOSAUR and STRANGE BUT NOT A STRANGER. He has also written a number of novels, including INTO THE SUN, PLANET OF WHISPERS and WILDFIRE. Jim was recently awarded his first Nebula Award for his novella BURN, ending his always-a-bridesmaid-never-a-bride streak with the Nebula, for which he was nominated nine times before BURN. As for the Hugo Awards, the other graddaddy of sci-fi awards, Jim has two. 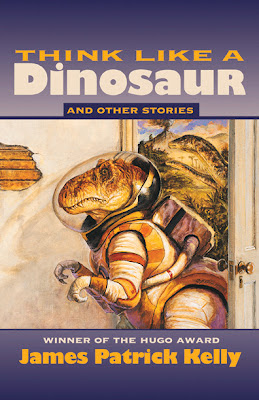 But Jim has also gone beyond the medium of the printed book, writing radio plays, planetarium shows and stage plays; as well as being a pioneer in Podcasting. But that's still isn't the end of Jim's work. He is a columnist with Asimov's magazine, where he has published a short story in every June issue since the beginning of time, I think. He is also a brilliant writing instructor, having taught at the Clarion workshop, Viable Paradise and the Stonecoast MFA program at the University of Southern Maine. And finally, but far from the least of his achievements, he was mentor to one of the greatest literary minds of the new Century.

And without further delay, I give you James Patrick Kelly, one of the few men outside of my family I'm on a hugging basis with...outside of any money changing hands. 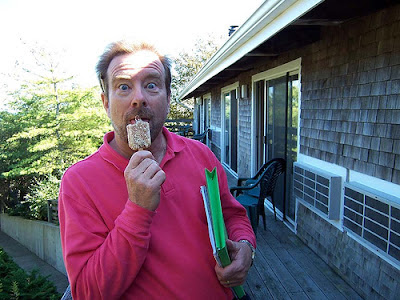 Noir Writer: What are the differences between the themes of crime fiction and science fiction? Are there any differences?

Jim: If it were possible to circumscribe the themes in any genre, it would reduce that genre to formula and we could outsource the writing of it to our robot colony on Altair IV. It seems to me that crime fiction is the literature of transgression. Science fiction is a little more slippery. I heard a colleague opine recently that it is the literature of unlikely juxtaposition. I'm not sure I agree, but I've been processing that. 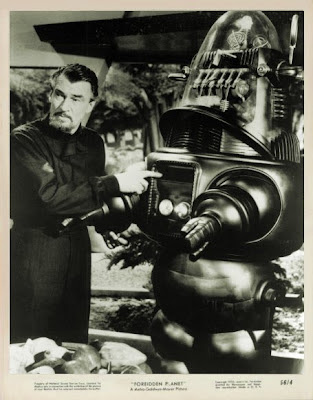 Noir Writer: How much do you expect readers to bring to a story? In other words, what do you trust they will be able to comprehend without coming right out and explaining everything?

Jim: There's one of the big differences between crime fiction and science fiction: the world building. It's a difficult problem, because we sf practitioners have to explain what is different in a strange environment without clotting the narrative with lectures, whereas crime writers more often than not operate against a backdrop that their readers are familiar with. Science fiction has been undergoing a kind of crisis of confidence. Some have worried that our stories are too often pitched at that narrowest of science fiction audiences, those who have spent lifetimes reading the stuff. The world building had gotten so complex that readers who are new to the genre get confused, then frustrated and then many give up. There has been a call for a more accessible science fiction, which still maintains the virtues of the genre. I was hoping to answer that call with BURN 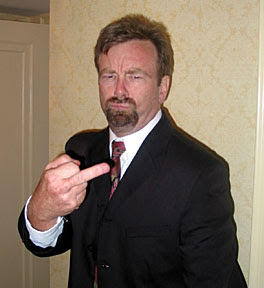 I want to thank Jim for taking his time in getting back to me...er...I mean taking the time to answer some questions. I hope you enjoyed the interview and will go out and read or listen to Jim's work - you won't be disappointed. Until next time, have a great week.
Posted by Steve Allan at Monday, June 11, 2007

Although I rarely read SF, there’s one short story by James Patrick Kelly that happens to be among my all-time favorites. It’s called “Dancing With the Chairs” and even though it has a fantastic element to it, I seem to remember it was published in Asimov’s. It’s been ages since I read it and I don’t know if it was ever anthologized but I’ll look it up.

I'm glad I have something to point to when my old profs scoff at my gleeful pilgrimage to Maine for my PopFic MFA...JPK is so erudite when discussing the whole "genre" issue, I'm looking forward to working with him. But he really should have known better than to hang out with the "groovy" chicks in Enter the Dragon, as they were obviously both dated and evil. Shame.

I can't help but notice you completely avoided any mention of Mr. Kelly's career as a CIA operative (1979-1985), particularly his assignment as "advisor" to the Nicaraguan rebels and his infamous appearance during the Iran-Contra hearings, when pointed at Senator George Mitchell and said, "I'm taking the Fifth and you can kiss my ass."

Jim "Story Man" Kelly has what can only be called a gift for seeing into the heart of a narrative. With the aid of his magic story-decoder ring, he helps you to chip away all of the crud until the essence of your story comes shining through.

Rumor has it that he acquired said magic decorder ring during a mysterious midnight rendezvous in the heart of the secret underground tunnels of Tenochtitlan, the ancient Aztec Capitol. Clearly, the Aztecs had more than gold hidden in their empire.

Other rumors even name JPK as Tezcatlipoca reborn, which would explain how he got the ring. But what do I know? I'm just an MFA student, not an Aztec historian.