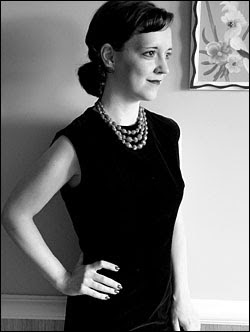 Today's guest is the talented Megan Abbott, author of THE SONG IS YOU and the upcoming QUEENPIN. DIE A LITTLE, Abbott's first book, earned her nominations for an Edgar, a Barry and an Anthony Award. She also earned a Ph.D. in English and American literature from New York University - that means she's wicked smart.

She also the daughter of Patti Abbott, a gifted writer herself. 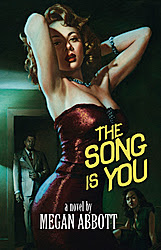 NoirWriter: THE SONG IS YOU

is set in Hollywood. Why is tinsel town such a great setting for noir novels? 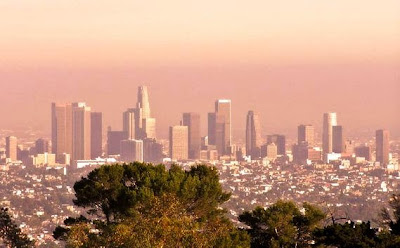 Abbott: Part of it is tradition. So much classic noir is set in LA that, by setting stories there, you can kind of write your way into that world. But I think a lot of is thematic. The whole concept of Hollywood as a dream factory, as celluloid fantasy, as a glossy scrim concealing a darker reality—that’s pretty perfect for noir, for all its themes of deception and betrayal. There’s also the tradition of California as the end of the frontier, as the land of milk and honey, the promised land. That works both ways for noir. You have the idea of all these desperate souls coming to this place to see their dreams realized, only to discover the dream is a lie. At the same time, though, located at the end of the frontier, there is this nihilistic quality to Los Angeles and Hollywood—it’s a dropping-off point. An awful terminus, like you see in Nathanael West, Horace McCoy. And of course there’s the glamour of Hollywood too. The famous nightclubs, the movie star scandals. That stuff is just fun to write about.

NoirWriter: Your PhD dissertation concerned hardboiled fiction and film noir. Do you find that even though crime fiction and crime films contain the same characters, stories and themes that the two media receive different
respectability from academia and/or the general public?

Cinema studies embraced film noir a long time ago, but English Departments have been a bit slower to accept hardboiled novels into the literary canon. While there’s been much progress, I did still see a tendency to ghettoize it as “genre fiction,” as disposable literature that is only significant for what it tells us about the culture rather than having an inherent literary value. But it is changing—Hammett and Chandler are pretty snugly perched in the canon and appear regularly on syllabi—and not just in classes focusing on detective or crime fiction but in basic American literature classes. Thompson, Cain, McCoy are moving their way in. The more attention paid to the span of their influence (e.g., Hammett’s influence on Hemingway, or Cain’s influence on French existentialists), the more you start to see serious considerations—it’s happening.

NoirWriter: Do you think that the lack of genre texts in high school and college literature classes lead to an artificial hierarchy of what is considered quality literature?

Abbott:That’s interesting. I know that high schools are using these books more too and maybe that will have a longer term impact. In many ways, it leads to the larger question of whether we can even speak of literary value as if it were something we could all agree on. But I think that, generationally, this whole issue is becoming moot. Not because teens and 20-somethings don’t read (which is something everyone likes to say), but because, in my teaching experiences at least, I found most don’t tend to think in terms of high and low culture the same way as previous generations. They’re all just texts, whether it’s SIN CITY

or THE SUN ALSO RISES

or BUFFY THE VAMPIRE SLAYER

—some are clearly more complex and artful than others, but all are worthy of interpretation and discussion. 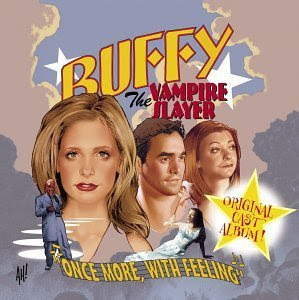 NoirWriter: What is your opinion on the constant clash between literary fiction and genre fiction?

Abbott:Others have said it better, but basically I feel that all fiction is genre fiction, or none of it is. “Literary fiction” can be broken down into pieces just like any other book: coming-of-age novels, family novels, relationship on the rocks novels, political novels, etc. Someone very wise just said to me, "the discussion about literary vs. genre is over. It’s all just one genre now. Called reading.”

NoirWriter: How much does a writer need to examine him/herself to pull off believable stories and characters? Can it be achieved without examination?

Abbott:Gosh, for me, I think it’s probably best achieved without examination. I try to turn off the analytical part of my mind when I write fiction. Paul Schrader once said that his brain had two parts: the part that makes movies and the part that writes about movies, e.g., for Film Comment. Making a movie, he said, you’re like a doctor performing risky surgery on a patient. So if the critic side of him comes over to the operating table and asks if he can see the patient, Schrader knows he can’t let him do it: “If I let that critic see my patient,” Schrader said, “he’ll look him over and say everything is great and I’ll look back down and, I promise you, my patient will be dead.” NoirWriter: Your mom is also an excellent crime fiction writer. Did you always know she had this talent? 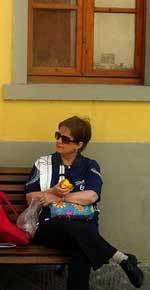 Abbott:Yes—she and my father are both writers and major inspirations. My mom used to write children’s stories when I was small and I loved them. Later, she turned to poetry and short stories and eventually to crime-theme fiction. She’s an amazing writer—darkly funny, deeply haunting.

NoirWriter: (This next question is from a guest interviewer: your mom) Patti: You've often commented on how you became interested in film noir long before you read crime fiction and indeed I remember you watching those movies at what was probably an inappropriate age. As an adult writer looking at these movies today, which classic film's ending would you change and why?

. A fantastic movie, transcendent. Howard Hawks, John Wayne, Montgomery Clift, John Ireland, all at their best, creating this fascinating study of masculinity, of relationships between men. And the ending nearly destroys everything that came before. Nearly. 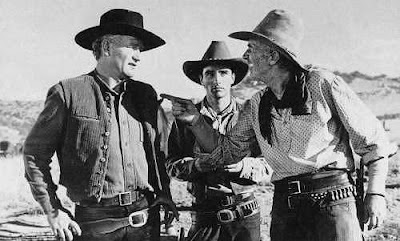 NoirWriter: When I read your stuff there are moments when I can't help but think of certain films. Do you find that many people find a connection between your books and movies? How much has film influenced your writing?

Abbott:Film is my biggest influence, it’s true. I see movies playing when I write. I see old actors. I see sets. I wrote a scene in THE SONG IS YOU that I set in a bar from KISS ME DEADLY

. A scene in DIE A LITTLE at motel courtyard from IN A LONELY PLACE

. Sometimes I don’t even realize I’m doing it until it’s pointed out to me. I love it when that happens. It’s a common language, those of us who love noir movies especially. Those movies have really utterly suffused my unconscious. All those years of dreaming about Ralph Meeker had to come to something.

NoirWriter: You write such dark stories. What did your mother do to you as a child? Are you planning a MOMMIE DEAREST 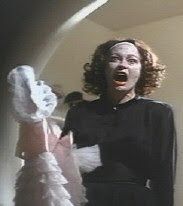 Abbott:No memoir planned. I couldn't ask for a better upbringing. As for the darkness, I can only say my parents let me follow my interests wherever they took me. And, in my household, the harshest criticism you could lay at the feet of any a movie or book was that it was sentimental. It was years before I could admit to loving the end of IT'S A WONDERFUL LIFE

. But that’s a dark movie. The sentiment is earned, right?

NoirWriter: You worked for the RAND Corporation. How deep into government conspiracies were you? Was it difficult to thwart Mulder and Scully? Is the truth out there?

Abbott:Oh, the truth is out there, all right. Alas, I never made it past minimal security clearance (probably a wise choice on RAND’s part).

Of course, this is probably what I’d say if I had found the truth, too, isn’t it? 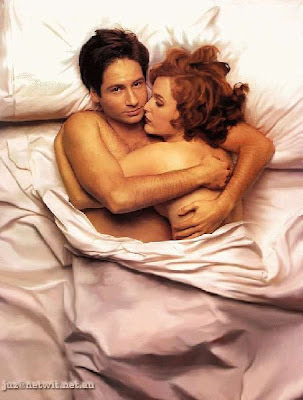 Mulder and Scully: Apparently, The Truth Is In Their Pants

NoirWriter: I usually like to ask a political question - makes me feel the poli sci degree is good for something. When you look at the potential candidates running for President do you feel like hiding somewhere and quietly crying yourself to sleep, or is there some hope?

Abbott:It’s easy to be depressed, but I choose life, Steve. Whenever I’ve been cynical, it’s just been out of laziness. This time, I got a couple of candidates I really like and only one who has disappointed me gravely. Plus, I like the whole cockeyed spirit of populism that seems to be brewing these days. Of course, rage and despair fire up the noir spirit, so either way, we’re good, right? 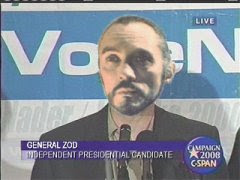 NoirWriter: OK, Barbara Walters question: If you could be a tree, what kind of tree would you be? Why?

I want to thank Megan for her time. If you haven't read any of her books, head to your local bookstore or your favorite black market dealer, and grab one.

I hope you've enjoyed the interview. Next week my guest will be Denise Mina. Until then, have a good week.
Posted by Steve Allan at Sunday, April 15, 2007

Great interview. Good questions, and bringing out mom was inspired. Megan is a wonderful interview subject. Great writer too.

General Zod is an option? That kind of opens things up...